For information on 'How to donate to the Food Bank' please see Ludlow Food Bank Facebook page.

The food bank in Ludlow is a ministry of Ludlow Baptist Church, but is supported by all the churches in Ludlow.
We give food parcels to people in crisis situations, who are referred to us.

Please contact at This email address is being protected from spambots. You need JavaScript enabled to view it..

We have volunteers on duty 11a.m.-1p.m. Monday to Friday, when agency workers or parcel recipients can collect their parcels.

We do not offer an automatic delivery service, but parcels can be delivered by special arrangement. 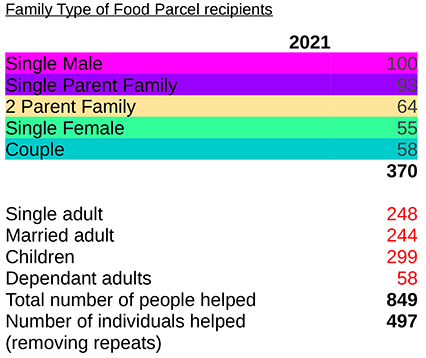 This year, as every year, the largest group we see are single men, although the percentage is lower than it has been previously. What we have seen this year is a percentage increase in the number of single parent families, and couples. 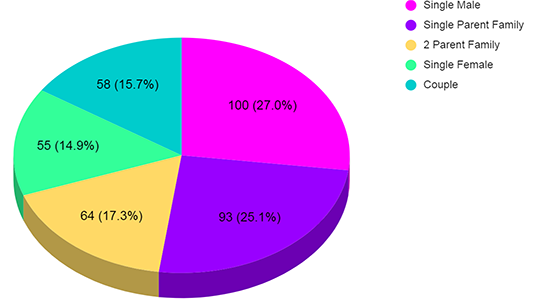 Many people who come to us only have one food parcel, and it is sufficient to see them through the crisis they are experiencing. 77 household though have had more prolonged crises, and have had at least 2 food parcels. There is one household that has had 8 food parcels so far this year, but their situation has been quite difficult. 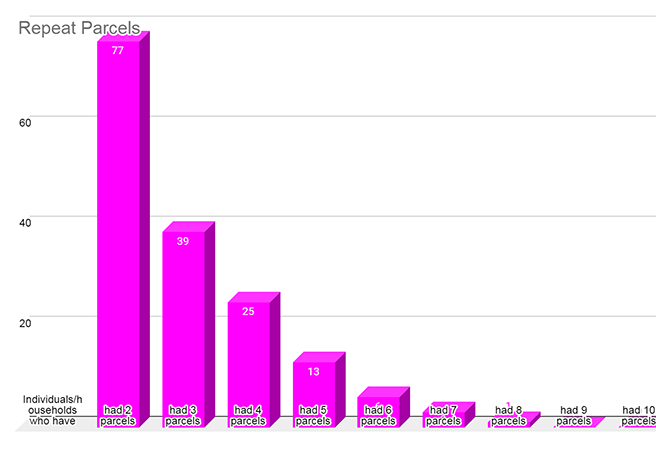 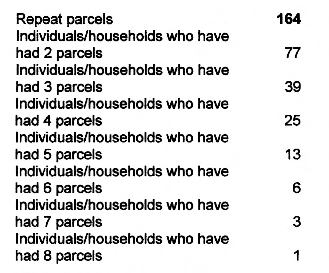 Our food parcels are even more generous now, as we have been given quite a considerable amount of grant money and donations, for which we are very grateful.

We now provide vouchers for butchers, green grocers and bakers. In total each food parcel recipient receives £25 worth of vouchers to spend in local independent shops. We are very fortunate to be able to do this in Ludlow, many towns only have large chain shops, and it is much more difficult to reach such an arrangement with national chains.
The hugely positive thing about the vouchers is that it gives people more choice, and the dignity to choose items that they enjoy.

We will be making homecooked frozen ready meals to put in the food parcels from this month. Two of our regular volunteers will be working with Di from Hands Together Ludlow to fill our freezer. If there are any keen cooks who would like to help with this, please let me know on 07896 706 189 or email This email address is being protected from spambots. You need JavaScript enabled to view it.. Thank you. 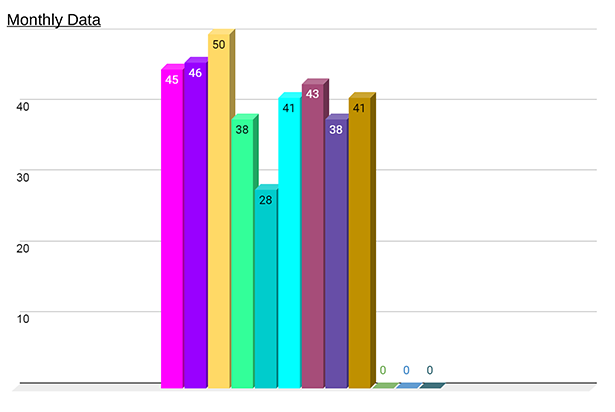 As you can see from the above graph, we were fairly quiet in May, but the rest of the year has been pretty consistent. We have been unable to find a pattern regarding quiet and busy months. It varies considerably every year. 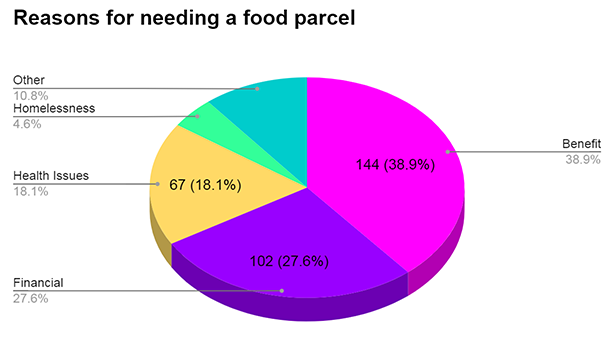 The reasons given for needing a food parcel are outlined above. The most common reason is still problems or delays with benefit payments. The section labelled “Financial” relates to people in full time work who are still struggling to make ends meet. This is a problem in a town with low average wages, but high average cost of living.

The proportion of homeless people we have helped has dropped dramatically.
This is mostly because homeless people are no longer being housed temporarily in the Travelodge – Foldgate Lane, or Wooferton. They are now being housed in Craven Arms or Church Stretton, so those food banks are being called upon to help more.

“Other” Reasons given for needing a food parcel

As can be seen from the graph below, most of the “other” reasons given were directly due to Covid 19. Usually it was because someone was having to self-isolate, and was unable to shop on-line, either because of lack of funds, or lack of internet.

Unfortunately 13 food parcels went to people who were victims of domestic violence, often in temporary accommodation after being forced to leave their homes.
We have had 5 people who were rehoused, and the costs involved with moving took all their money for a short time. A food parcel helped them hugely.

Four people were victims of theft. 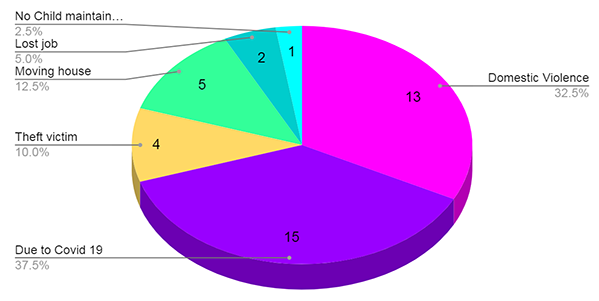 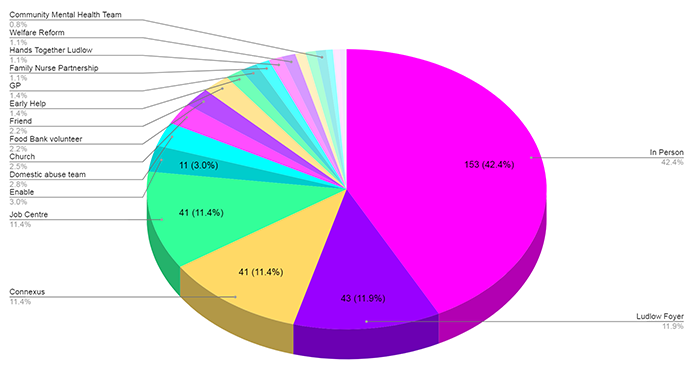 As can be seen by the above graph, We continue to have quite a high proportion of self-referrals. When people do self refer they are asked for details of their circumstances. Sometimes we are able to refer them on to other agencies who can offer more long term help. Very occasionally we have turned some people down – especially if they have asked for multiple parcels. It is very unusual for anyone who is not in genuine need to ask for help. Sometimes, people are in tears, and are ashamed to be asking for help. 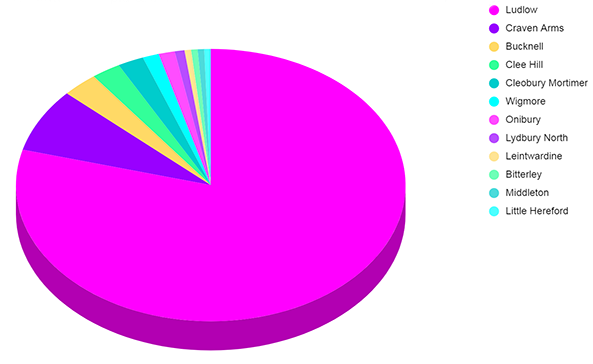 The above graph shows the location of food parcel recipients. We operate in a much smaller area than we used to. 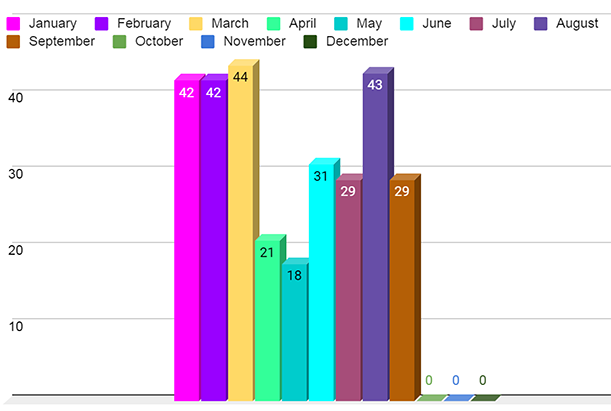 The above graph shows the number of children (aged 0 -18) we have helped each month.
These are children who live either with one or both parents, or other relatives.

We do often help out the young people living at Ludlow Foyer, some of whom may be below 18, but for our records we regard them as independent adults.

As can be seen from the graph, January, February, March and August saw us helping a good number of children.

During the summer holidays there was an initiative provided by Shropshire Council called
HAF (Holiday Activities and Food). Children who are in receipt of free school meals could attend these events free of charge. They were 4 hour sessions, 4 times a week, for 4 weeks. The sessions included physical activities, craft activities and food. It came out of the Mark Rashford appeal.

The activities were put on by several providers throughout the county who were reimbursed by the Council. Unfortunately Shropshire is such a large county that many of the less well off children were not able to afford to travel to some of the events they wanted to attend.

Hopefully, if they continue next year, there will be more provision for children in Ludlow.

This is not related to petrol, but to household fuel such a gas and electricity.
In Ludlow we are very privileged to have a fuel poverty fund. This is mostly made up of donations from retired people who have donated their winter fuel allowance.
Up until now, this has been administered by the Furniture Scheme, but we are looking at ways of incorporating this into the food bank.

There are also groups such as the Marches Energy Agency who may be able to take referrals for grants to people who are struggling financially. This is something that we would like to take a more active role in – hopefully I will have more to say about this in my next report.

As of August this year, you may have noticed that our food bank donation point is no longer in Tesco. This is because all the food that is donated in the Fare Share donation point is now shared between us and Hands Together Ludlow. Any tins, packets and ambient storage foods are used by the food bank, any fresh produce is used by Hands Together Ludlow to make community meals.
Before this arrangement was put in place, all the food donated in Tesco Ludlow was taken to a depot in the West Midlands and then redistributed to food banks in the area. Other food banks nearby still benefit from donated food in the West Midlands, but the food donated in Ludlow Tesco is used by Ludlow Food Bank and Hands Together Ludlow. This has the added benefit of cutting down on the carbon footprint of this food.

We are planning to make our donation points in both One Stop shops more noticeable, people were using them a rubbish bins!

There are so many people who give freely of their time and money to help Ludlow Food Bank operate. So many people to thank!

• Donors – thank you to everyone who helps us financially, to everyone who puts food items in the collection points. To all the churches and schools who collect for us at Harvest time, and the many businesses, clubs and organisations who have given to us so generously.
• Volunteers – everyone who helps in any way at the food bank is a volunteer. Thank you to our team of shoppers, our team of delivery drivers, donation point emptiers, food parcel makers, and management committee members.
• Working Together – a very special thank you to Working Together who occupy the other end of the Rockspring Centre. Thank you to their young people who sort our donations, check that everything is “in date” and help us keep tidy. Thank you also for the lovely party and cakes you made for us in August.
• Ludlow Baptist Church – thank you for allowing us to use so much space in the building, looking after our money and your general encouragement.
• Social services and other agencies – thank you for referring people to us, and enabling us to know who needs our services.
• CTAL thank you to all the churches around Ludlow who have been such a support.

Day on Which Parcels are Collected 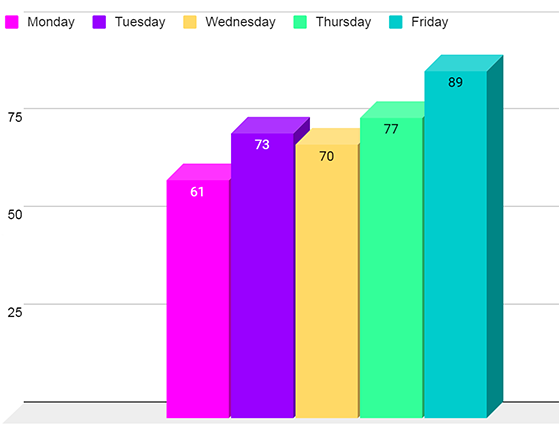 For our volunteers, here is a graph showing how busy each day has been, so for Friday volunteers, yes you have been the busiest!