For information on 'How to donate to the Food Bank' please see Ludlow Food Bank Facebook page.

The food bank in Ludlow is a ministry of Ludlow Baptist Church, but is supported by all the churches in Ludlow.
We give food parcels to people in crisis situations, who are referred to us.

Please contact at This email address is being protected from spambots. You need JavaScript enabled to view it..

We have volunteers on duty 11a.m.-1p.m. Monday to Friday, when agency workers or parcel recipients can collect their parcels.

We do not offer an automatic delivery service, but parcels can be delivered by special arrangement.

Ludlow Food Bank has continued to be busy over the last 6 months, although demand has reduced slightly since the extrmely high numbers in 2020.

We now have most of our longstanding volunteers back at the food bank, this includes people who were shielding, but have now been fully vaccinated. It is lovely to welcome them back. They are having to get used to some changes in working practices, such as food parcel recipients now having appointment times to come and collect their food parcels, and instructions being given via a screen instead of by phone. Both of these changes have made things easier, especially when phone signals are poor.

Our team of shoppers has been very busy recently, as the excess stock we had earlier in the year has now been distributed to the people who needed it. Today we have received a pallet of food from Defra, which will help a lot. People are still being generous, both with donations of food and money. We are so grateful.

Parcels given out by Family type:

In the first six months of this year we have given out 248 food parcels, with enough food to feed 564 people for a week. When we remove repeat parcels we have helped 371 different individuals in or near Ludlow. 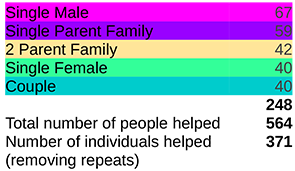 In common with previous years, single men have been the group who have needed the most help, followed by single parent families and 2 parent families.

Repeat Parcels
We have given away 101 repeat parcels. This is where people have been in extended crises which have lasted for some time.
One household who have had a particularly difficult time have had 7 food parcels, but the most common number of parcels is just 1 at 177. 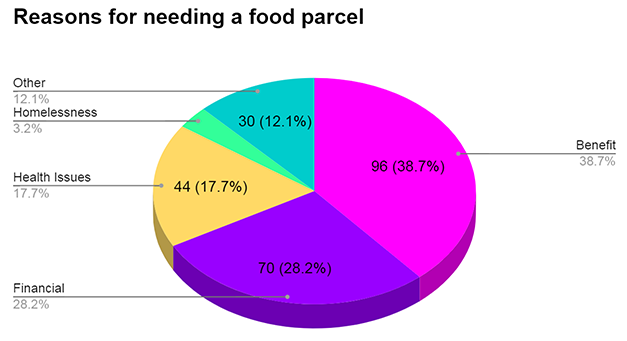 The proportion of homeless people we have helped has dropped a lot. This is because most homeless people in South Shropshire are now homed in Craven Arms or Church Stretton. The food banks in those towns have seen a big increase in the amount of support they offer to homeless people.

The “Other” Reasons we have been given are shown below: 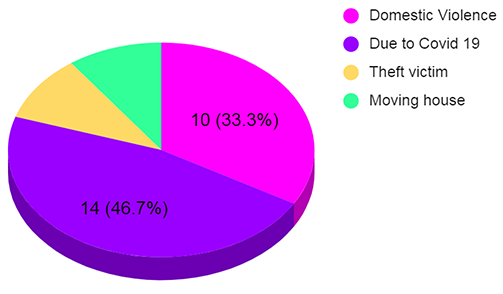 The vast majority of food parcel recipients (79%) live in Ludlow itself, with the other 21% going to nearby towns or villages. There are now active food banks in Craven Arms, Bishops Castle, Cleobury Mortimer, Tenbury Wells, Church Stretton.

We often have zoom meetings with other food banks, in a supportive atmosphere. 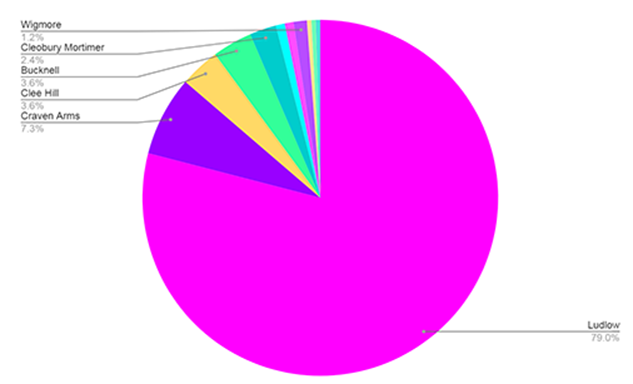 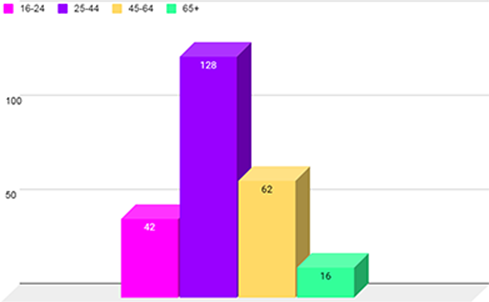 It does seem that people in the 25-44 age group have needed more help than those who are younger or older. It would be interesting to see if this is the same at other food banks. 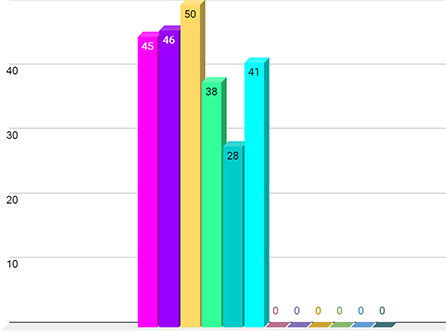 The busiest month we have had this year was March with 50 food parcels going out.

Last year we had 5 months with more that 50 parcels being supplied, so hopefully the national crisis is calming down a bit.

Number of children helped each month 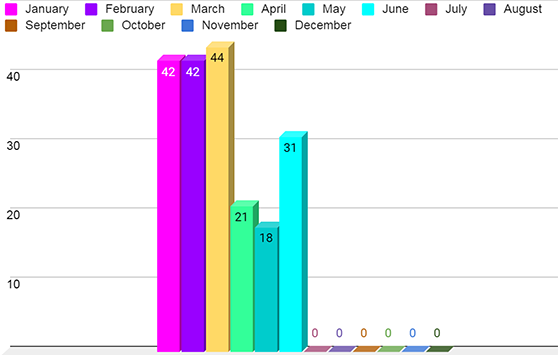 We have helped relatively few children this year, with 198 having been helped. This could be because of the roll out of free school meal vouchers for eligible children during the school holidays. Thank you Marcus Rashford.

Below is a list of the ways in which we receive referrals:

We have had more people applying for a food parcel for themselves. I do ask some questions as to why they need a food parcel, and where possible signpost people to other agencies who may be able to help them in other ways.

One group who have been particularly helpful are the Marches Energy Agency (MEA) who have provided fuel poverty payments and help with bills.

Days on which food parcels are collected 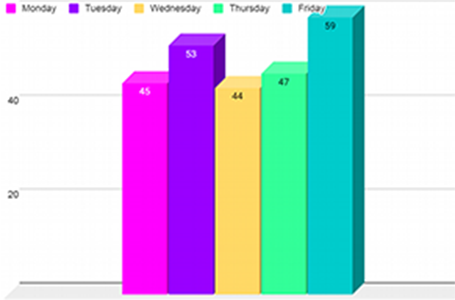 We now open 5 days a week, and our busiest day is Friday, followed by Tuesday. We didn’t open on Tuesdays prior to the Covid epidemic, but such is the demand now that we really do need to be open 5 days a week – although there have been a few days where we had no referrals. If demand drops, we may be able to just go back to opening four days a week, but we don’t want to be too hasty with that.

We still give out fruit and veg vouchers, and butcher vouchers with all of our food parcels. These give people a choice of what extras they would like to buy. Many food banks around the country are turning more to vouchers as they feel that it gives people more dignity and control of their own diets. The vouchers have proven to be popular, with 100% of the butcher vouchers, and 82% of the fruit and veg vouchers being used in our local shops.

We would like to thank the local butchers and greengrocers who participate in this scheme.

Last Christmas we also trialled giving out “Deli” vouchers which enabled people to buy cheese, crackers, nuts and other Christmas treats. Hopefully we will have enough funds to be able to repeat this in December.

We have been very fortunate to now have a number of new volunteers, it is great to meet new, enthusiastic helpful people. Everyone who helps in any way at the food bank is a volunteer. None of our funds are used to pay wages.

We have been helped financially over the pandemic, as there were a lot of grants available to food banks during this time. We do still have reserve funds, but can’t be sure how long they will last.

We do have collection boxes in many places around town, and now that the Tesco collection for Trussell Trust is over, hopefully our box in Tesco will be made a little more prominent.

A “Big Thank you” to everyone who has given their time, money or food to the food bank.

We really couldn’t do it without you